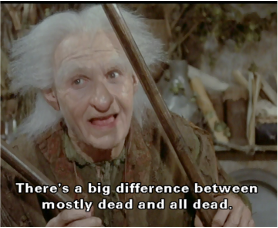 This cutoff week was an eventful one. Bills needed to be out of fiscal committees by Monday, February 28, and out of the opposite chamber by Friday, March 4, at 5:00. As of now, the Voting Rights Act, SB 5597, is dead. It did not come out of the House Appropriations Committee in time, and it is unlikely to progress any further this year. This is an important bill involving many interests, so, as in “The Princess Bride,” this bill may only be mostly dead. There are various parliamentary ways to rescue it, but it would take extraordinary action and we are listing it as (mostly!) dead for now. WSAC worked very hard on this bill and offered multiple amendments that would make the policy work better and apply more equitably to counties (e.g., we disfavor a pure population-based calculation to determine preclearance), and we expect to see it back again next year.

Since the start of the pandemic, counties have been able to conduct meetings remotely, pursuant to various proclamations by the Governor. We have sought to codify some of these provisions to better serve the public and allow us to conduct remote meetings under various circumstances (chiefly, local emergencies) irrespective of the Governor’s action. The Senate earlier agreed to a request from WSAC and AWC to combine the key provisions of two bills into one bill by adding parts of HB 1056 into HB 1329, which would provide remote testimony options. The combined bill would allow counties to conduct remote meetings (held over Zoom, phone, etc. without a traditional physical location) during a declared emergency (statewide or local) throughout the duration of the emergency. We were able to get the newly-combined bill (HB 1329) unanimously through the Senate late on Thursday night, so all that is needed now is for the House to concur and the bill will go to the Governor.

SB 5155 is a tort liability bill carried over from last year. This bill would allow interest on judgments for tortious conduct to begin to accrue from the date on which a person suffers an injury or loss. This means interest would start to accrue before a claim was filed and, in some cases, even before a county was made aware of the injury or loss. Current law provides that interest begins to accrue on the date a judgment is entered by a court. The date when interest begins is especially important in an era where litigation and even settlement negotiations can drag on for years. Much delay can result from plaintiff choices or court schedules, neither of which is in county control. The Senate adopted an amendment that exempts local government from its application, but the House took this amendment out. We have worked very hard with other stakeholders to keep current law on post-judgment interest for public agencies. This bill is on the House Floor and must run by Friday at 5:00 pm. As of this writing, we are close to having enough votes to amend the bill to exempt public agencies, but the fate of the bill (e.g., whether this controversial bill even comes up with one day left to go) is unclear.

Washingtonians are good at recycling. Our state has been a leader in recycling and ensuring…

The Legislature is off to a big start, with a huge number of bills being…